If you want to see Chi Sun College’s commitment to service and community outreach in action, look no further than Elder Academy, a hallmark programme of the College now set to begin its sixth semester.

Elder Academy aims to connect the residents of Chi Sun College with senior citizens living in the surrounding Kennedy Town neighbourhood through the most meaningful exchange of all: education. Each semester, Chi Sun College students teach classes to the elders on a variety of subjects, including art, conversational Mandarin, qi gong (氣功), and basic smartphone skills. A partnership between Chi Sun College and two NGOs in the area, the program has already made a lasting impact on the surrounding community. 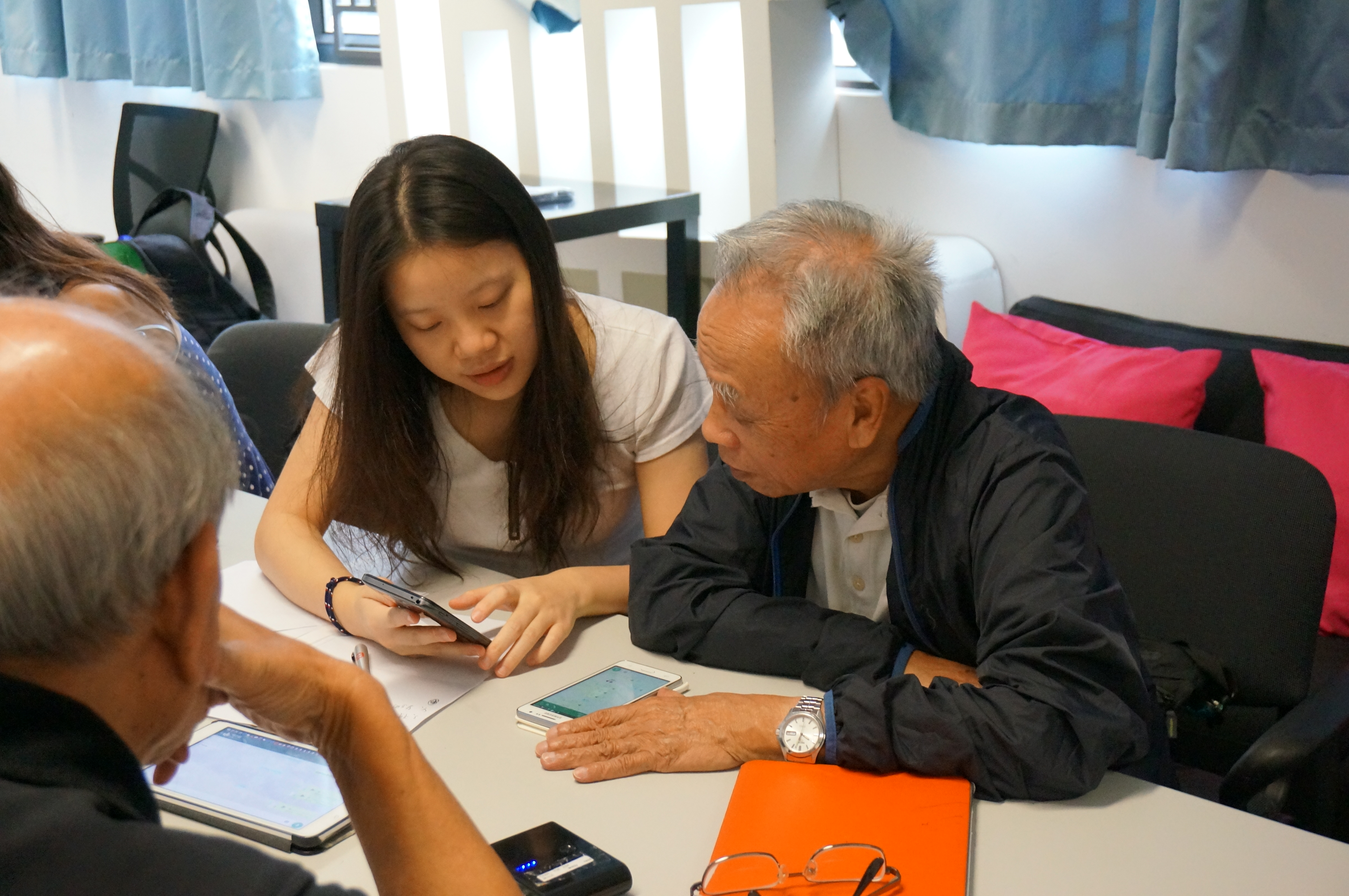 A HKU student assists the elders during the basic smartphone skills course.

The idea for Elder Academy came from former Deputy Master Albert Ko, who was born and raised in Kennedy Town and wanted to create a platform for interaction between two very different generations.

Taihua Hu and Meili Khong, Chi Sun College Resident Tutors and overseers of the programme, acknowledge another practical reason to engage with the surrounding community:

“The whole student village is situated in Kennedy Town. We’re kind of new, and sometimes we are loud, we are noisy – we’re students! – so the idea is to give back to the neighborhood,” Hu said in a June interview.

Added Khong: “It’s a chance for [students] to serve the community using whatever gifts or talents they have and build a long-lasting friendship with the elders.”

Another driving principle behind Elder Academy is to give the elders a chance to experience a university environment, as many may have had their formal educations cut short due to the Second Sino-Japanese war and other socio-economic factors of the 1950s and 60s. As a result, Elder Academy is closely structured around the HKU semester calendar, with four to six lessons for each individual class. Elders are welcome to attend as many different classes as they want, for as many semesters as they please, and receive certificates for each class they complete.

While the classes make up the core of the Elder Academy programme, there are also opportunities for interaction outside of the classroom, with lively opening and graduation ceremonies for each semester. Over a hot poon choi (盆菜) meal, HKU students act as servers for the elder students, and get the unique opportunity to engage with them in a more social setting. Some Chi Sun College students have even provided musical entertainment in the past.

Chi Sun College volunteers and elder students get to know one another at the opening (left) and graduation (right) ceremonies.

The challenges facing the Elder Academy programme largely result from its successes. In just over two years, enrollment has risen to between 250 and 300 students per semester, creating issues of manpower, fund management, and even finding venues large enough to hold such popular classes. In addition, the feedback has been so positive, and demand so high, that the partner NGOs have had to implement a lottery system to determine who gets a spot in the classes.

Regardless, the students of Chi Sun College are more than ready to take on the challenges, and are excited to implement new programming ideas in the future.

One is to provide more opportunities for elders to be teachers, following the example of a one-off cooking course held the previous semester: Elders took HKU students to a local wet market, instructed them how to cook special dishes, and then led a cooking competition in which they tasted and judged the HKU students’ cooking. The event was a hit with everyone involved, and Khong and Hu hope to give elders more opportunities to lead classes in the future.

In addition, Chi Sun College hopes to grow the Elder Academy programme further by increasing the number of classes offered, such as a new fitness class that will be led by Resident Tutor Yenkit Man in the coming semester. Others include music or dance classes that the Tutors hope to implement in later years.

No matter what the future may hold, Elder Academy is a programme on the rise, and will continue to grow and make a profound effect on both generations of participants.

Such an effect was clear to Yannie Ho, an instructor in the smartphone course, who said: “By helping elders in the neighbourhood, it increases their confidence and also helps them understand the latest technology. And as a group of student instructors, we also get to learn about their pasts and gain life advice.”

This sentiment was echoed by Hu: “We learn the knowledge for life from the elderly … it’s a mutual exchange.”